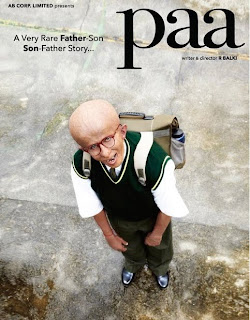 According to my informatin Amitabh bacchan was also in the movie but i could never find out Amitabh bacchan the angry young man (now old but still angry), the larger than life figure, grace full and amazing personality and with husky voice. I only found something better and different and an outstanding figure called "AURO". A 12 year old little boy who is suffering from a very rare disease. He has got all the innocence and child like behavior which a normal 12 year old can have.  Good sense of humor which can make people laugh.

The whole movie revolves around auro's Aura. Not embarrassed and hopeless about his rare disease but finds everything interesting and different from his point of view. One special thing is "Ego" of a 12 year old boy, when MP (Abhishek) does not come after promising.

I would say this movie could be the movie of the decade. With such great script and treatment with the script. Good direction and music and one final thing which makes this film special "Auro" amazing acting by Amitabh bacchan who just dissolved himself in the role in such a manner that he lost his total identity as Big B.

I would say must watch movie for all and hats - off to Big B and whole team. Well Done!!!